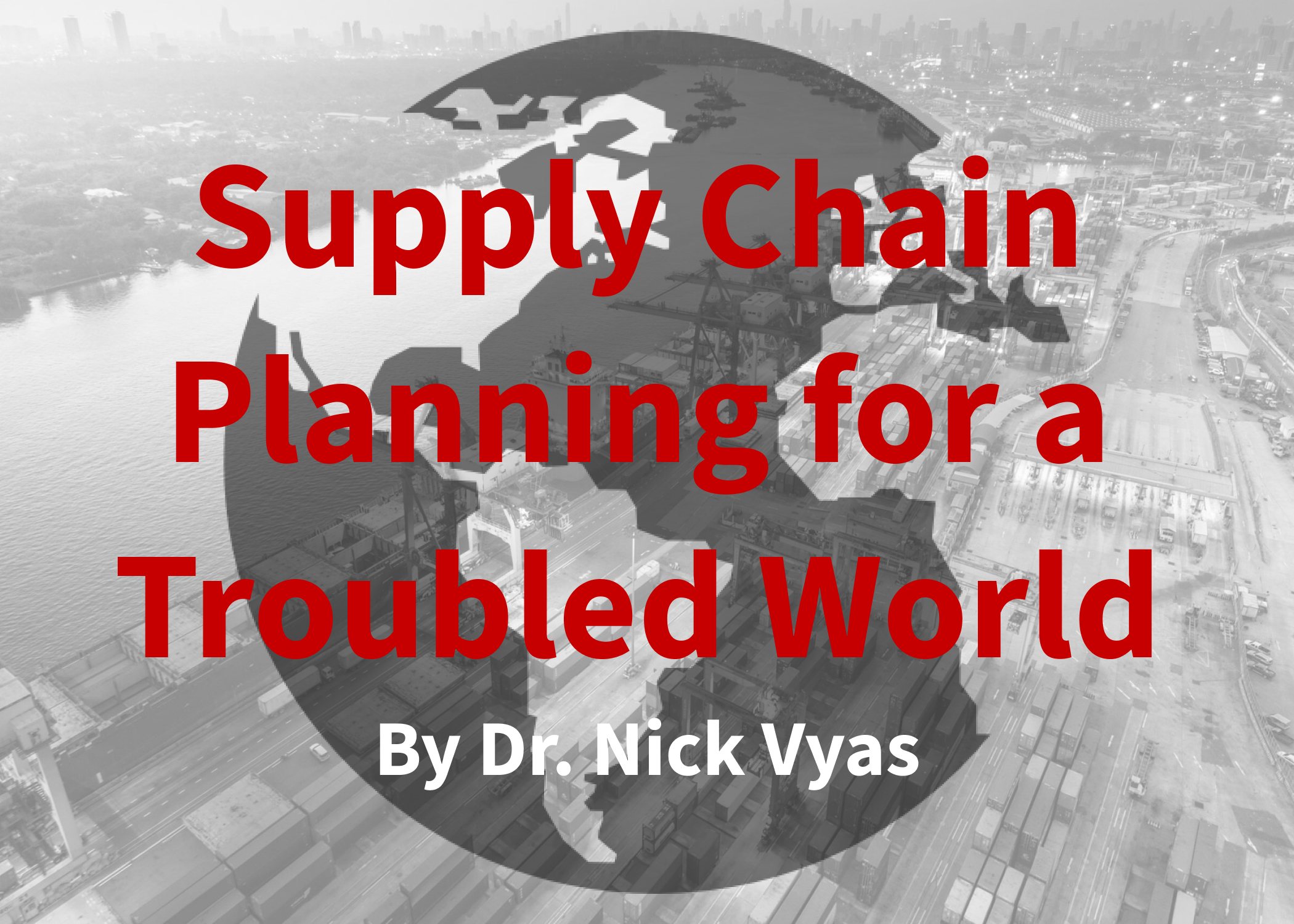 A crisis-ready supply chain will have to be guided by dynamic systems attuned to both economic and geopolitical trends. – By Dr. Nick Vyas | May 6, 2022

British Novelist Laura Spinney wrote in Pale Rider, an excellent historiography of the Spanish Flu of 1918, “At the root of every pandemic is an encounter between a disease-causing microorganism and a human being. But that encounter, along with the events that led up to it and the events that ensue from it, is shaped by numerous other events taking place at the same time.” This also rings true for the current pandemic. The many events that led up to this one – trade tension between two major economies, the obfuscation of data in the early days of the pandemic, rising authoritarianism in different parts of the world, and the recent spate of events – Russian President Vladimir Putin’s war, the food and energy supply chain crises – are shaping this pandemic as much as our encounter with the virus.

An important lesson to be drawn from the events that have shaped this pandemic is that geo-economics cannot exist in isolation from geopolitics. We discovered that the best practices of a free-market economy do not translate well into a politically incompatible ecosystem. Sharing the fruits of democratic capitalism without the necessary tools and skillsets to build strong institutions is more likely to result in resentment and chaos.

Consider the reported causes of Russia’s invasion of Ukraine. The post-Soviet era transition to a capitalist economy in Russia was difficult for people, primarily due to President Boris Yeltsin’s “shock therapy” reforms. But they worked. Between 1999 and 2008 – in what Russian economist Sergey Guriyev terms “the most outstanding decade in modern Russian economic history” – the country’s per capita GDP just about doubled, worker wages tripled, and the country’s share in the world economy grew fourfold.

However, the 2008 recession put an end to that dream run. Russia lacked the will and skills to protect its institutions, which could have aided in the rebuilding of its economy, as it did for many other countries. The crisis was particularly tough on the Russians. Nothing – not the myriad myths surrounding Putin, not the religious and political rhetoric aimed at the West, not the grand vision of a “Russky Mir,” and certainly not the regime’s return to Cold War-era authoritarianism – could save them from economic stagnation and, eventually, a recession.

Or consider China, which looks to be engaged in a revivalist campaign. To weaken a cunning pathogen at home while slowing the economy and disrupting global supply lines, the country has spent the last ten years constructing a global network of ports, railroads, airports, highways, and shipping lines. The Belt and Road Initiative (BRI) was unveiled when Chinese President Xi Jinping took office and has since spawned railroad and infrastructure projects stretching from China to Europe to Africa. It’s no secret that BRI is, in effect, China’s revivification of the Silk Road, a major route of transcontinental trade between China and Europe established by the Han dynasty more than two millennia ago. One problem with this aim is that today’s international trade flow has been built atop trade agreements that had at their core the laissez-faire values championed during the neoliberal movements of the 70s and 80s, not the age-old laws that allowed for the weaponization of trade. Beijing’s use of debt to grow its influence along the Belt and Road looks like something out of the imperial age.

That is why a recent news report about the Solomon Islands, a Pacific state situated 2,000 miles from Australia, made headlines. In early April, the archipelagic state, one of the more than 124 nations that have joined the BRI, signed a security pact with China that allowed the latter to send it armed police and military support in the event of an unrest. Given the island’s proximity to shipping lanes connecting Asia to America, the Pentagon correctly views the event as a serious threat to the security of the United States and its regional allies.

Meanwhile, the economy of Sri Lanka, an island country in South Asia, is on the brink of collapse due to a series of poor political decisions that included a return to the century-old practice of farming and mismanaged resources. One of China’s close allies and benefactors of significant capital investment, Pakistan, has gone through a turbulent, debt-induced political crisis.

As one would expect, all these ensuing events have sent shockwaves across the inextricably interlinked global supply chain. Oil, gas, and coal prices continue to soar, power infrastructure in parts of the world faces disruption, and a global food crisis looms on the horizon. Therefore, it is critical that supply chain organizations view these events as a signal to update their planning and risk management models.

Time for an upgrade

Supply chain planning involves strategies meant for both supply and demand. There is a rich arsenal of procurement strategies guided by processes such as MRP (Material Requirements Planning), supplier optimization, risk management, and vendor development on the supply side. On the demand side, we have well-honed processes like demand planning and forecasting and surprisingly efficient replenishment models like TOC-SCRS, which Dr. Eliyahu Goldratt’s “The Goal” popularized.

The answer, which is likely to be unpopular, is that most supply chain planners take into account data regarding the physical flow of goods, laws and regulations, organizational and natural environments, and learning from natural and manmade disasters such as the 2010 Iceland volcanic eruptions or the 1986 Chornobyl disaster. They do not consider political indicators such as an increase in authoritarianism, capital flight, corrupt practices that allow for the exploitation of natural resources and human rights violations, or an autocrat’s extraconstitutional bid to extend his term.

As is evident from the above-cited examples of recent events, supply-chain planners need to realize that geopolitical developments provide a sound barometer of risks affecting the global supply chain.

An improved supply-chain planning system, at its most basic, must include the following key features:

A sitrep dashboard: A smart supply chain planning system will produce a decision matrix that is dynamic and attuned to real-time reporting of information. It should be able to signal that the supply-chain risk profile for a specific product in a specific part of the world is, say, green, yellow, or red. For example, the NHS in the United Kingdom and the Ministry of Health in Singapore both have online sitrep dashboards that have helped them coordinate resources during the pandemic.

Intelligent information sensing: It should be able to capture consumer and industry sentiment, provide guidance on the adequacy of risk mitigation plans, and sense socio- political deviations from the norm.

Decoupling-ready: It should be able to design a robust multitiered supply chain network – as opposed to today’s fragile single-strand supply chain structures – that can decouple from a troubled zone when and where needed. Furthermore, it should be able to build an adequate level of redundancy to prioritize supplies of the most critical and essential commodities in the event of a crisis.

It can be done

For a supply chain practitioner, it is disappointing to see that the government’s technologically advanced capabilities for sensing geopolitical events do not benefit the state of our supply chain preparedness. For example, U.S. intelligence was highly accurate in the run-up to the war. That, however, did not translate into the government’s taking adequate measures to insulate supply chains of essential commodities from the war’s ramifications.

Hopefully, with newer business intelligence technologies, supply-chain planning systems should be able to analyze reliable data from all sources, including social, economic, political, and environmental data. This will only be effective if economic powers want to engage with their trading partners more deeply and ethically. One way to accomplish this is to ensure that Free Trade Agreements include guidelines for adhering to fair trade practices and selecting partners who share these values. This will aid in the development of robust multi-strand supply chain networks that are more agile and responsive to future shocks.

Fortunately, I teach many of these lessons in our MS GSCM program as part of our class subject: “Global Supply Chain Management in International Settings.” We cover foundational issues and evaluation of how to create a multi-dimensional supply chain network that is not only efficient but also agile and sustainable.